How Employees Social Distance in Asia vs. North America: Do Masks Play a Role?

Last month, VergeSense utilized our workplace sensor data to analyze employees' social distancing habits. The findings highlighted some of the natural tendencies of people to cluster when they’re in the workplace. As a follow-up, we wanted to identify if there have been noticeable differences in regional social distancing habits as workers begin returning to the office.

To do so, we analyzed sensor data from 20M+ SQFT of office space across the five continents that VergeSense has sensors installed within (Asia, Europe, North America, Australia, and Africa). Specifically, we took a look at both the average distance in meters of employees and the rate of interactions below 1.8 meters (6 feet) for May-June.

Here is what we found: 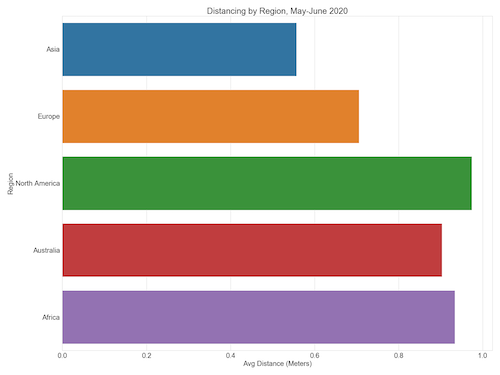 Despite most of Asia having COVID-19 largely in check at this point, the region illustrated the closest average distance (0.56 meters) between employees in the workplace. Meanwhile, North America (predominantly U.S. data), which has struggled to contain COVID-19, was home to the greatest average distancing (0.97 meters) between employees. The scenario, which many would assume to be the opposite given the current number of cases in each continent, continued to play out even when we compared city-to-city data in North America versus Asia.

Why is employee distancing closer in Asia, and how come closer distancing within indoor environments — where the majority of transmissions appear to occur — hasn’t led to further outbreaks there?

For one, Asia has always been home to closer distancing between employees in the office. While in the U.S. the average square feet per worker has hovered around 194, in China, for instance, this number is more often between 50 to 60 square feet. Secondly, most countries across Asia have been quicker in responding to the initial outbreak with more aggressive policies, which has generally kept epidemic levels under control. Therefore, employees heading back to the workplace in these areas are mostly doing so in regions where the current transmission rates are much lower.

However, what might be making the biggest difference with employee distancing in Asia vs. the U.S., and the outcome of those events, is the use of masks in the former versus the latter. According to a recent survey by McKinsey, while the vast majority of the U.S. population says they are wearing a mask at least once a week to comply with state or local guidelines for grocery stores and retail outlets, only slightly more than 40% say they are commonly wearing a mask in office buildings.

Comparatively, in countries like Japan, that have contained COVID-19 far better than the U.S., mask-wearing is nearly constant. One reason for that might be that mask-wearing has long been customary in these areas for purposes such as containing transmission of colds, as well as, allergies, fashion statements, and even distancing from society. That familiarity with masks has led to a higher percentage of the population using masks in almost any shared space. YouGov, a British polling firm, found that 86% of Japanese wore masks in public spaces in response to COVID-19. That compares with 82% of the population in China and 71% in the U.S.

That shared space includes office space. Many of the Fortune 1000 companies we work with in Asia either mandate or readily provide masks and face shields for all employees. Furthermore, in some Asian countries, mask use in the workplace is even mandated by the government on a national level. Therefore, it might not be as surprising to see employees are much more comfortable coming into proximity to their masked co-workers. We saw this also play out when we examined the rate of interactions below 1.8 meters (6 feet).

Asia Leads the World in The Rate of  Employee Interactions Under 1.8 Meter 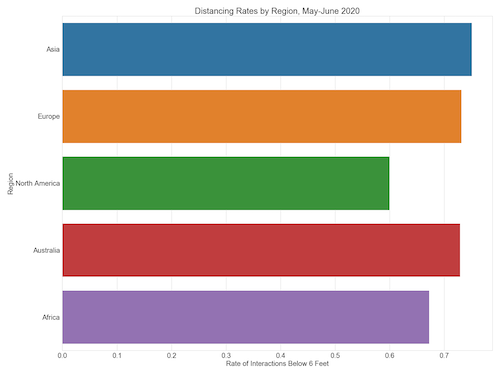 On the above chart, 1 on the X-axis would mean every interaction between employees in shared spaces is occurring below the recommended 1.8 meters of distancing. Asia once again leads the list here, followed closely by Europe, with over 70% of employee interactions non-compliant with recommended social distancing guidelines.

Comparatively, although earlier in their return, North America has the lowest rate of interactions within 1.8 meters. However, it’s worth noting that this number still hovers around 60% in the U.S., meaning that more than half of the interactions between employees are not compliant with the recommended CDC distancing guidelines.

Our past research has indicated that clustering within the workplace can be inherent and simply closing small conference rooms and opening larger ones will not necessarily ensure proper social distancing. Therefore, masks could continue to be pivotal in controlling potential transmission in instances when social distancing is not possible.

How to Conduct An Audit for Building Management Efficiency

Get the latest posts delivered right to your inbox.